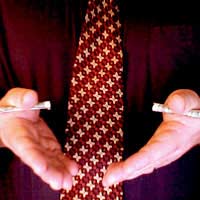 Some of the best magic tricks are the ones that cannot be duplicated by the hands of the audience. This is the case with the Impossible Penetration Trick, so read on and uncover the magic!

The Effect
The magician rolls up two notes (£5 or £10 notes will do) into tight cylinders and holds them in the crook of the thumb one to each hand. Grabbing the top and bottom of each note cylinder with the thumb and fingers of the opposite hands, the magician shows how they form a trap of sorts - it is impossible to separate the notes without letting go of one of them - unless you know the secret of the Impossible Penetration. Once more the magician grabs the notes but this time they seem to melt right through one another and the magician shows them still gripped by the fingers, having held tight the whole time.

The Secret
Knowing how to grip the notes in a special move allows the magician the ability to separate them - because they were never truly linked.

Materials
Two notes are all the materials required - although two sheets of paper cut into roughly the size of paper money could be used just as well, or even two pencils cut to size.

The Impossible Penetration Trick can be as simple or as dramatic as the magician wishes. At its base this trick is a very simple, quick effect that can work wonders as a wager trick - the magician bets he can do this thing and the spectator cannot, as he does not know the secret. With a bit more story and embellishing, the Impossible Penetration Trick can be expanded into a dramatic demonstration of the magician’s powers over science and nature.