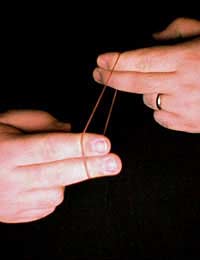 This extremely quick and visual effect happens right in front of the spectator’s eyes and requires only the most simple of sleights to perform.

The Effect
The magician runs an elastic band around his fingers and starts a story about how easy it is to fool the eyes. Placing the elastic band around the first two fingers of his right hand he makes a fist and shows the band to his audience. On the count of three the magician opens his hand, the band jumps magically from surrounding the first two fingers to the last two.

The Secret
The secret to the Jumping Elastic Band is when the magician makes a fist; he wraps the band around all four of his fingers.

Materials
A normal elastic band, preferably borrowed from a spectator, is all that is required.

Preparation
A little practice is all that is needed and the awareness that someone standing behind the magician can see the secret.

The Jumping Elastic Band is as visually stunning as it is simple. This is one of those pub tricks that anyone can learn, which also means that if anyone sees what the magician does as he closes his fist, the game is up.

Have another elastic band trick ready to go back to back with this one, and the Jumping Elastic Band will be more effective, establishing that something magical is going on.