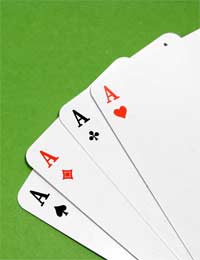 Poker is a hot game these days, and any time you can work poker into a magic trick…well then you have a hot magic trick. In this classic Aces over Kings, you have a spectator randomly deal two four card poker hands - but of course as the magician you manage to win.

The secret here is the way the deck is stacked before the trick, and the order in which the cards are dealt.

Only a regular deck of playing cards are required for this trick.

There is some card stacking that needs to happen for this trick to work, in addition to the normal practiced of patter and style. The four aces should be stacked on top of the deck, with the four kings on top of them. The deck is now ready to perform.

This card trick is a great way to lead into routine, because it requires you to set up the deck in advance. If you learn a number of card tricks that do not require advance prep, always lead with one that does. It is much harder to go the other way around, as it often involves switching decks during the show, which can look dodgy.