Coin Through a Leg Trick 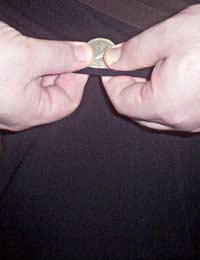 A great coin trick that can be done anywhere at anytime - as long as the magician is wearing trousers.

The Effect
The magician borrows a coin from a spectator and examines it, declaring it counterfeit. At the protest of the spectator, the magician endeavours to prove that it can’t be a normal coin by laying it against his leg and covering it with a fold of his trousers. Almost immediately the magician reaches behind his leg and lets go of the trousers, showing that the coin has vanished and appears to have passed through his leg!

The Secret
The trousers provide the distraction and a finger palm provides the method for the vanish.

Materials
A pair of trousers made of material loose enough to make a fold of cloth is required.

Preparation
No advance preparation is needed to make a Coin travel Through a Leg.

This effect is great when performed in conjunction with a number of other coin tricks, perhaps as the lead into a whole series of “funny behaviour” with the coin. A borrowed coin works wonders, but if none are readily available the magician can provide his own coin. A new, shiny coin works best, especially if the trousers worn by the magician are dark.

A pair of dress trousers of the “no press” variety work well, as the material will fall smoothly back in line without a crease. A waiter doing pub magic and wearing an apron can use the apron for this trick just as well. This Coin Through a Leg can be used to make any small object vanish, but coins work the best, as the key move of sliding the object into the finger palm can be problematic with a rough or oddly shaped object.