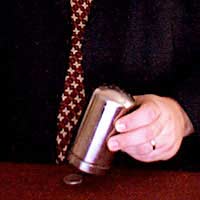 One of the absolute classics of after-dinner magic, this trick requires good posture and a strong presence…and a salt shaker.

The Effect
The magician, perhaps at the end of a meal, announces that he is going to make a coin disappear. Taking a small coin out of his pocket, he places it on the table in front of him and then asks to be passed the salt shaker. He places the salt shaker over the coin and then wraps the shaker with a paper napkin. “One, two, three!” The shaker is lifted, but the coin is still there. Puzzled, the magician replaces the shaker and tries again, “One, two…wait, it wasn’t the coin I was supposed to vanish!” The magician slaps the napkin, which goes flat, and the salt shaker has vanished.

The Secret
The focus of the audience on the coin is perfect misdirection, allowing the magician to vanish the shaker completely undetected.

A small coin, a salt shaker, a paper napkin and preferably a cloth napkin, although the trick can be done without the latter.

Preparation
Laying the cloth napkin in the lap is all the advance preparation needed, as long as the rest of the materials are to hand.

The Vanishing Salt Shaker trick is truly a classic and one that is fairly easy to perform. For both reasons this trick should be practiced a good deal before performing in front of a real audience to ensure that it will go off without a hitch.