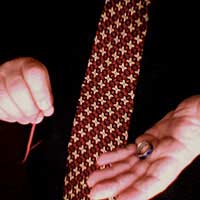 A truly stunning effect, Negative Gravity may have your spectators believing you truly have control over the laws of gravity.

The Secret
Using an elastic band makes this trick work as it provides the needed friction and movement.

Materials
An elastic band and a ring of some sort are all that is needed.

Preparation
No advance preparation is needed if you can count on borrowing both a ring and an elastic band - otherwise provide your own and allow them to be examined before and after the trick.

A fantastic impromptu trick, Negative Gravity can be done on the fly or as part of an established routine. If the magician borrows both the elastic band and the ring, the audience will have to accept his magical powers.