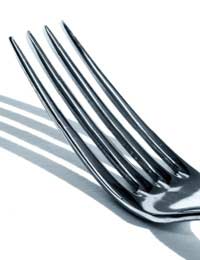 There is a classic gag that is perfect to pull in a restaurant or at your favourite pub, one that will produce gasps of horror followed by gasps or relief, and likely the unction to pound on the magician. In this twist of that classic gag, You'll Put your Eye Out, you increase the first gasp quite a bit …and the desire to pound you afterwards.

The magician sits across from his victim at a restaurant or pub bar and swiftly and surely appears to jab a fork into his eye, producing an appropriate amount of "blood". Even the most jaded of audiences will gasp when he pulls back an "eye" on the end of a fork.

The secret move is combined with a ketchup packet (pre-perforated) to produce the initial shock. No harm is done to your eye.

A fork, a ketchup packet, and a fake eye; a grape, a meatball or something similar can be substituted for the fake eyeball.

It takes some skill to puncture a ketchup packet with a fork and NOT hit your eye, so opening the packet a bit or poking a hole in it in advance is advisable. Affixing the fake eye on the fork for Part Two of the trick is also a required advance prep item.

1) The magician takes a fork in his right hand (or left if he is left handed) and the ketchup packet in the other.

3) This is part one, and may be a trick you have already done for your pals at the pub. Once this is done a few times you are ready (on a night long after you have done part one) for Part Two.

4) Part Two involves having a fork with the fake eye on the tines ready to go. You perform this one exactly as part One, moving swiftly enough that the fake eye will not register.

5) When your pals say "Yes, we know, ketchup packet" you reveal the fake eye instead.

6) The reason this one works so well as a shocker is that they are expecting the same old gag. Even if they have seen you do this a hundred times, the addition of the fake eye is sure to shock.

7) Saftey Tip: You do NOT need to move quickly with the fork. For part One and part Two you can even lift it to your eye with the tines already held securely in the hand. The spurting of the ketchup is enough to convince them of the damage for the split second of shock before you show them it was all in fun.

No ketchup packet handy? Try a mini creamer carton, one of those single serving kinds with the liquid creamer. Held paper side out they pop nicely when the fork this, and the white liquid is just as icky under the circumstances.