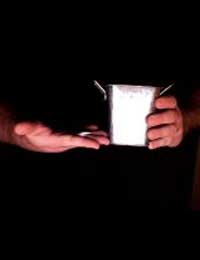 A classic coin trick that is some two hundred years old, yet it still delights audiences of all ages. The Miser’s Dream can be performed on stage or for small groups equally.

The Effect
The magician picks up a wine bucket from a table and begins to tell a story about a stingy man who found a magic lamp and made a wish. From that point forward whenever he wished the man could produce money from thin air - and the magician “catches” a coin and tosses it loudly into the bucket. The magician proceeds to produce dozens of coins from all over the stage, a seemingly endless supply.

The Secret
One coin is repeatedly vanished and made to reappear, while a hidden stack of coins in the bucket provides an audible distraction.

A stack of a dozen coins and a metal bucket are required for the basic effect. Additional effects can be produced with coin droppers and other props.

Preparation
The stack of coins is hidden behind the metal bucket before the performance.

The Miser’s Dream works wonderfully on stage thanks to flash coins, the metal bucket and the sound of coins dropping into it. It can be done just as effectively in a crowd if the magician can control the angles of the bucket well enough.

The Long Card Trick
Share Your Story, Join the Discussion or Seek Advice..
I like how you explain everything about the coin trick and appreciate the time you took showing it-- Is there a certain way to hold the coins you are dropping in the pail and holding with you left hand? Thank youFloyd Reed
Toy - 10-Jan-18 @ 6:43 AM
Title:
(never shown)
Firstname:
(never shown)
Surname:
(never shown)
Email:
(never shown)
Nickname:
(shown)
Comment:
Validate: