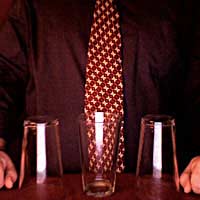 The Effect
The magician sets out three mugs on a bar top, some face up and some face down and claims that he can have all three face up in three moves. Quickly he reaches out with both hands and flips over two mugs and then again and again and all three are face up. Resetting the mugs the magician invites a spectator to try to duplicate the feat, but it cannot be done.

The Secret
Once the mugs are reset, in a different starting pattern, getting all mugs face up is impossible in three moves.

This is one of those pub tricks that helps to establish a magician’s air of mystery. While anyone paying close enough attention will be able to figure out the puzzle, it will serve its purpose the first time the magician shows it off. Another advantage of The Mug Puzzle Trick is that it requires only a table and three mugs or glasses and can be done anywhere, with no worries about angles or point of view. As long as the audience can see the mugs, the magician is set to go.