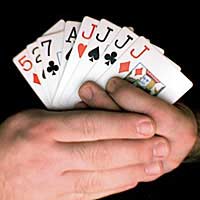 A great effect to open a show, Four Crooks is a card trick that blends a bit of misdirection, a touch of sleight of hand and some storytelling to entertain your audience.

The Effect
The magician, deck of cards in hand, begins to tell a story about four crooks who set out to rob a bank. The magician deals off four cards and sets the deck aside and then turns the cards over to show four jacks, which represent the four crooks. Putting the cards back on top of the deck, the magician puts them one by one into the deck at random spots and then with a magic pass, all four cards appear back at the top - where the police are waiting.

The Secret
A bit of sleight of hand and advance preparation allows the magician to show eight cards as four, the key to convincingly performing the Four Crooks.

The magician should make a packet of eight cards - the four jacks and four random cards. The random cards should be on TOP of the jacks and all eight cards placed on top of the deck. The packet should be off set, so when you first pick, up the deck you can catch a break under it - in other words isolating the eight cards without appearing to do so.

There are a number of key moments in this trick - getting the packet of eight cards off the deck, showing the four jacks while hiding the four random cards and then “scattering” the crooks.

The story should be your own and can be about anything you like - it doesn’t have to be about a bank robbery. The story gives you a nice excuse to show off four cards and have them reappear at the top of the deck.

This trick can be started with the eight cards in the hand, which is fine if the magician wants to forgo learning the sleight of hand required to get the packet off the deck.