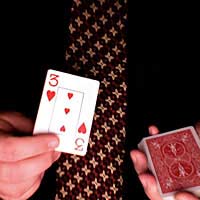 A visual stunner, the Sloppy Shuffle convinces the audience of one thing, while the magician is doing the opposite.

The Effect
The magician announces that he is not going to do a typical card trick, but try something different. Spreading the cards he allows a spectator to choose one and then return it to the deck. He then begins to mess up the cards, turning them over and mixing them up, so that they are randomly face up and face down. With a snap of the fingers, all the cards return to face down position except for the chosen card, which is shown to be face up.

The Secret
The sloppy shuffle part of the Sloppy Shuffle actually organises the cards into two neat packets, all facing the same direction.

The magician will get plenty of shocked responses to this trick, which is a visual stunner.