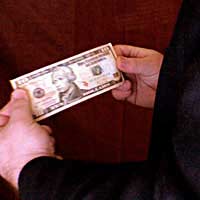 Another trick that is simple to do, the Upside Down £5 Note Trick reminds the audience once more that the magician is the keeper of secret and special knowledge.

The Effect
Perhaps in reference to a wager or just for fun, the magician borrows a note from a mate and announces that he is going to demonstrate his mastery over illusion with it. Holding the note out for inspection, the audience confirms it is a normal note and then the magician folds it in half. Again and again the magician folds the note until it is a neat little package. As he begins to unfold the note the magician explains that the magic was done already, when they first inspected the note they thought it was right side up, but - as the last fold is undone - the note is clearly upside down.

The Secret
Knowing the right folds and how to hold the note allow the magician to perform the Upside Down £5 Note Trick.

The Upside Down £5 Note Trick is a perfect trick to perform at a moment’s notice and can be done anywhere and in front of any audience. It is a “light” trick, more fun than mysterious.