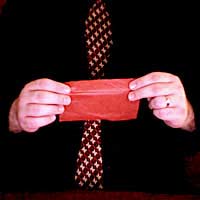 A bit of paper and a few magic words and the magician will amaze his close up audience once more.

The Effect
The magician pulls out a sheet of cigarette paper and holds it up for inspection. Tearing the paper in half, the magician places one half on top of the other and then tears that packet in half. Once more the pieces are torn in half and then rolled into a ball. The magician concentrates, utters the magic words and then unrolls the ball to show that it has been restored completely.

The Secret
The key to the Torn and Restored Cigarette Paper is the fact that there are two sheets of paper where the audience thinks there is only one.

Materials
While cigarette paper works very well for this trick, especially in a pub setting, any small bit of paper will do fine. Two sheets are required.

The magician should roll up one sheet of paper into a ball and place it in his pocket with the unprepared sheet.

This is a great trick to do at a pub, where the magician can just reach into his pocket, pull out the paper and perform the trick inches away from his audience. The principles of this trick are the same for any torn and restored paper trick, so by enlarging the sheet of paper, the magician can enlarge the audience as well.