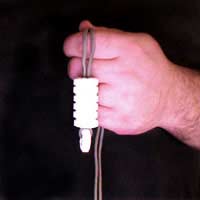 A small packet of polos and a shoe lace combined with a handkerchief and the willing help of a spectator lead to a trick that will take your breath away.

The Effect
The magician produces a roll of polos and asks a spectator to open them and pour them into his hand. Taking one mint, the magician threads it on to a shoe lace and then threads the rest over the lace, forming a sort of minty necklace. Asking the spectator to hold both ends of the shoelace, the magician covers the necklace with a handkerchief, reaches underneath and then reaches up with one hand and pulls away the handkerchief, showing that all the mints have come off the shoelace and lay in the magician’s other hand.

The Secret
The secret to the Escaping Breath Mints is this: breath mints are easy to break.

Materials
A small packet of polos and a shoe lace, as well as a large handkerchief.

Preparation
No advance preparation is needed, just plenty of practice.

This trick is a fantastic impromptu illusion, if you happen upon someone with the right kind of mints in his pocket. If not, setting out to perform the Escaping Breath Mints is perfectly acceptable and a great introduction into any other illusions that use mints or sweets. A single roll of unopened polos will provide a great prop and just the right amount of mints for the trick. If you don’t have a single role, plan on using around seven to ten mints.