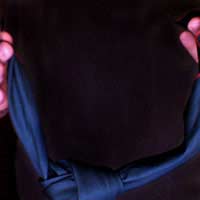 More of a challenge than a magic trick, the Knot in the Handkerchief trick will still establish the magician as a man of rare talent.

The Effect
Perhaps after dinner the magician makes a wager that he can take a handkerchief or dinner napkin and tie it in a knot without letting go of either end in the process. Once a doubter has taken him up on the wager, he offers them first go. Around the table the napkin passes, each person trying to tie a knot in it with out letting go of either end and failing. Finally the napkin is passed back to the magician, who lays it out on the table and rolls it up in a rope-like fashion. Crossing his arms, the magician picks up the ends and with a flash reveals that he has tied it in knot!

The Secret
The key is the starting position of the arms in this trick.

A napkin or handkerchief long enough to perform the trick - perhaps two to three feet long when rolled up in rope-like fashion.

Preparation
No advance preparation is required, making this a perfect pub or after dinner trick.

This is one of the class of “magic tricks” that are a bit more like puzzles than illusions, but from the very beginnings of magic, magicians have challenged “normal men” to contests they can’t possibly win, but at which the magician seems to breeze through without any trouble at all. This Knot in Handkerchief has a secret that will be revealed as soon as the trick is done, but should still reinforce to the audience that the magician is a person of special knowledge.