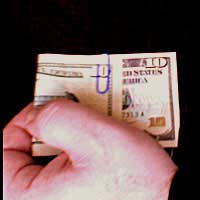 Performed with common objects found in a pocket or at a desk, this trick is a quick, neat effect that can be done anywhere.

The Effect
The magician picks up two paper clips and some paper money. Holding the note up he begins to talk about a famous stage trick called the Linking Rings and says he has a smaller version of the same trick.

Folding the note he then clips the folds with one paper clip and then folds it again. Clipping it with a second paper clip, the magician explains he is going to link the two clips before the eyes of the audience without touching them at all. Grabbing both ends of the note the magician snaps it open and the clips fly off, linked together.

The Secret
The secret to the Linking Paper Clips is knowing how to fold the note and where to put the clips.

The Linking Paper Clips is a great impromptu trick - any time the magician spots paperclips and can be assured of getting his hands on some folding money, he can perform this trick. It is fast and simple, but has an air of mystery about it all the same. This trick can be performed as a stand alone, as part of a larger routine, or even as a wager; “I bet I can link these two paper clips together without touching them…”