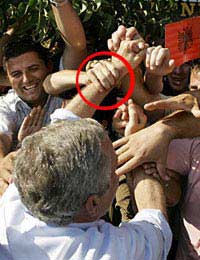 This trick is an imitation of the stunt reportedly performed on President George Bush while on a recent trip to Albania. The president was visiting a small farming village, around 30 km from the country's capital Tirana on 10th June 2007, when it is claimed that his watch was stolen whilst shaking hands with enthusiastic locals.

In what is now being called the "George Bush Watch Snatch", we recreate the trick performed on the President.

A move that borders on the mystical, the magician removes the target's watch completely unawares and undetected.

One of the hardest kinds of slight of hand moves, the Watch Snatch is considered a pinnacle of the craft. The magician approaches the target and engages them in conversation, typically something that requires a bit of thought on the part of the volunteer. The magician's hands are here, there and everywhere, moving the target around the stage as he talks, keeping both the volunteer and the audience engaged in the proceedings. Suddenly the magician holds up a shiny strip of metal that looks familiar and says, "Is this yours?" The target suddenly checks his wrist and then looks back up, stunned and admits that, yes, that is his watch.

The secret to the Watch Snatch is a combination of direct manipulation of the target's arm and watch and the ability to misdirect like a pro.

No special materials are needed; however this trick won't work with a watch that has a slip on band. Only watches that are placed over the wrist and then fastened can be stolen with a good chance of success.

If you thought you needed a lot of practice for other moves, be prepared to work much harder and much longer on the Watch Snatch. A delicate touch isn't required, but a deft one is and it is the combination of being obvious and making the audience oblivious that makes this work.

Should you master the Watch Snatch you will rocket up the scale of perceived skill in the eyes of your audience. Stories are told of men and women who can pull this move off successfully. There are two elements to performing the Watch Snatch; the Move and the Misdirection.

Practice with a partner to get the moves down and do not perform this trick until you have mastered it!
Next Page