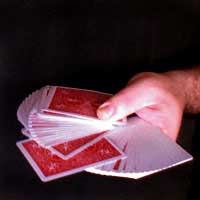 This is a fun card trick that gives the magician the chance to tease his audience while he amazes them.

The Secret
Utilising the double lift allows the magician to get it wrong on purpose, setting up the amazing and comedic finish to the Changing Card.

Materials
Only a normal deck of playing cards is required.

The Changing Card is one of hundreds of card effects that fall along the same lines - the magician, full of confidence, performs a trick and expects applause and admiration, but he gets it wrong. Then, just when the audience is about to have fun at his expense, he shows who is the master with a surprise ending that shows he knew what he was doing all along.