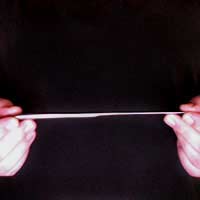 A very deceptive visual move that can be performed anywhere and in any outfit - and it is not limited to a knife.

The Effect
The magician displays a butter knife and declares that he will pass it through his leg without requiring a trip to the hospital afterwards. Taking a seat, the magician leans forward over his right leg and reaches out with both hands over his thigh. Holding the knife in both hands horizontally over his leg, he counts “one, two, three” and on three quickly moves both hands down, on either side of the leg, until they are underneath the thigh - still holding the knife with both hands.

The Secret
The key in the Knife through Leg deception is a quick bit of sleight of hand just as the hands approach the leg, moving the knife around the leg instead of through it.

Materials
A butter knife, marker, stick or any object roughly five to six inches in length and easily held and manipulated with the finger tips.

Preparation
The only advance preparation needed is to make sure the object to be passed through the leg is long enough and that the right angles are maintained while performing.

This is one of those quick, visual effects that work really well as a stand alone, “check this out” with a bunch of mates or as part of a longer routine.

If a knife sharper than a butter knife is used, then extra care should be taken by the magician not to cut himself, especially if the tip is very sharp, as it will tuck into the forearm slightly during the “Secret Move.”

Once again, any similarly sized object can be used in place of the knife - especially good if performing for children or at a location where possession of a knife would be frowned upon.