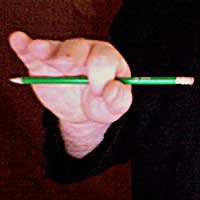 A very classic gag, this trick is actually an optical illusion that is easy to learn.

The Effect
The magician produces a pencil from a shirt pocket, or perhaps plucks it from the desk of a co-worker. Claiming he has the powers to alter things at an elemental level, the magician begins to rub the pencil in his fingers, staring at the ends and generally making magical motions over it. When he is fully satisfied, he says he will be able to exert his will power on the forces of wood to change it to rubber - but only for a moment. He then holds the pencil loosely in one hand and bounces it up and down - and indeed, the pencil seems to flop and bend as if made of rubber.

The Secret
The optical illusion formed by the bouncing of the pencil is the only real magic here.

Materials
A pencil, pen, knife or similar object may be used for this illusion.

The Rubber Pencil Trick is often found performed by a favourite uncle or a classmate, who usually says something like “watch this” and then bounces the pencil in loosely held fingers. The reaction of most people when seeing this is usually along the lines of, “Oh…neat!” In other words, not satisfying enough for a magician. In order to make this worthy of performance the magician needs to weave a tale around the illusion.

Once again, this is a simple optical illusion that is worth little without the story beyond a weak appreciation of the audience. Practice the story as much as the motion to make the pencil appear rubber and practice the motion at the right speed - too fast or too slow and it won’t work.