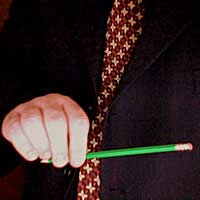 Utilising a classic sleight called the paddle move, this trick can be as simple or complex as the magician requires.

The Effect
The magician holds up a common pencil, the kind with the name of the pencil on one end, near the eraser. Holding it up for the audience to see, the magician turns it this way and that, showing all sides of the pencil and then allows it to be inspected. Upon retrieving the pencil he announces that he is going to remove the brand on it and lays the pencil in his hand. After closing and opening his hand, the brand is gone. Once more the hand is closed and opened and the brand has returned.

The Secret
The paddle move allows the magician to hide the brand in a close up setting with little chance of detection.

Materials
A pencil with a brand or image only on one side near the eraser.

Any magician familiar with the street performing trick called the Hot Rod will know what the paddle move is and enjoy this chance to use it with a common object. For those that don’t know, this trick will introduce them to a useful magician’s tool for manipulating small, long, relatively flat objects right in front of a spectator’s eyes. The application here with the Vanishing Brand Trick can be used with any similar object and is really only limited by the magician’s imagination.