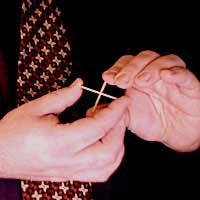 One of the attractions of the magician is his ability to pick up everyday objects and work wonders with them - this is one such trick.

The Effect
The magician picks out two wooden matches from a match box and sets them aside, inviting his spectator to examine them if they wish. Once the spectator is assured that there is nothing unusual about the matches, the magician takes them and holds them with the tip of the first finger and thumb of each hand. Tapping the matches together, the magician demonstrates that they can not pass through each other - until suddenly they are through, linked it one smooth move right before the eyes of the audience.

The Secret
A secret move - along with the temporary grip of the match on the skin - allows the magician to perform Wood Though Wood.

Materials
Two matches or failing that, two rounded toothpicks or toothpicks with the sharp bits clipped off.

Wood Through Wood is a quick magic “bit” that is a great way to do a little magic for friends at the pub or sitting around the office. Impromptu magic is often not so impromptu, when the magician stocks his person with props and gimmicks, but it seems to be to the audience. Unfortunately the magician may be with the props and gimmicks and still be required to perform on the spot, and that is where tricks like Wood Through Wood come in. Once learned they are not easily forgotten, do not require advance preparation and can be performed at a moment’s notice in front of any audience. The small nature of the trick does favour close up audiences, however.