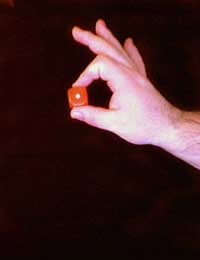 Changing Spots is one of the do-anywhere quick trick magical effects that leave your audience puzzled and entertained.

The Effect
The magician picks up a six sided dice, the kind used in board games and in casinos and holds it aloft between finger and thumb. Rotating the hand back and forth the magician shows the one dot on the front and the five dots on the back, until with a magical wave he turns the dice to show that the back dots have changed to six.

The Secret
An extra twist with the fingers causes the dice to rotate as well as the hand, creating an imperceptible secret move that allows the magician to deceive his audience.

Materials
A normal six sided dice, preferably the kind with dots instead of numbers.

Preparation
No advance preparation is needed, just an understanding of how to pick up, hold and turn the dice.

The motion used in turning the dice under cover of the hand movement is the same concept as something called the “paddle move.” The idea of turning an object under cover - yet right under the watchful eye of the spectator - allows the creation of a whole host of tricks, most of which can be done impromptu with no special props and under complete examination.