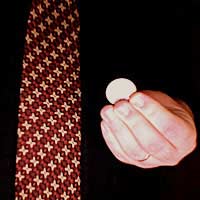 Yet another classic manoeuvre the pinch vanish can be done as a trick itself, but more commonly it is used as a sleight of hand move in a larger trick.

The Effect
The magician holds up a coin for display with one hand in full view of the audience. With his other hand the magician takes the coin and then rubs his fingers together. When the fingers open, the coin is gone!

The Secret
The sleight of hand move called the pinch vanish retains the coin in the starting hand.

Materials
No extra materials are needed beyond a coin.

The Pinch Vanish, also called the Drop Vanish, is used to fool the audience into thinking that the magician has taken the coin - or similar small object - away in his right hand while actually retaining it in his left.

Practice actually taking the coin to observe how your arms and eyes behave, so that you may imitate that behaviour when actually performing the vanish.