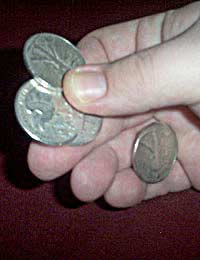 A great coin trick that can be performed sitting or standing and anywhere close up magic would be appreciated.

The Effect
The magician reaches into a jacket pocket and pulls out three coins then tosses them on the table in front of him. He picks up two of them and puts them in his left hand and puts the third coin back in his pocket. With a magic word, the third coin is shown to have joined the other two in the magician’s closed fist. Over and over the coin refuses to stay put, until all three coins mysteriously vanish!

The Secret
The finger palm and multiple coin vanish are used, along with a secret, fourth coin.

Materials
Four coins of the same denomination are needed, all roughly of the same appearance. No one coin should be obviously marked or stand out in any way. A dinner jacket works well with this trick.

Preparation
Place four coins in the right pocket of a dinner jacket or a pair of trousers.

This trick is best performed wearing a jacket and seated, as it makes the final vanish less obvious, but it can be done with trousers and standing with a bit of extra practice.