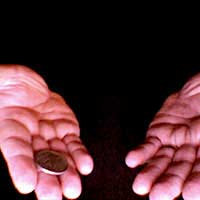 A quick fun bit with a coin, the coin snort provides a laugh while demonstrating the magician’s skills.

The Secret
Using a finger palm the magician first retains the coin in the right hand and then secretly transfers it to the left for reappearance.

Materials
A coin and a bit of acting.

Preparation
This is one of those wonderful bits that can be done anywhere with no advance preparation.

The magician should be 100% comfortable with the finger palm, French drop, or some other method of making a coin vanish while retaining it in the starting hand. This, plus a secret transfer of the coin, is all that is required to get a laugh, along with a bit of acting.

Especially good if using a borrowed coin, the magician can apologise as he hands the coin back, gingerly handling it as if it had just been ejected from his nose and is in need of a cleaning.