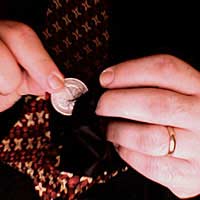 A great coin vanish when dressed to the nines; the Tie Vanish is sure to stun your spectator.

A second coin secreted in the lining of the magician’s necktie is the key.

Materials
A necktie and two coins, a handkerchief and a “magic wand.”

Preparation
A coin of the same denomination that will be shown to the audience is placed inside the lining of the necktie so that it rests at the tip of the necktie when worn normally. A handkerchief is placed in one pocket and a “wand”- which could be a pencil or anything similar- in the other.

This is a great bit of close up and tactile magic and it will really impress the volunteer holding the coin.