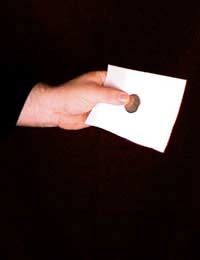 A brilliant trick, the coin fold will have the audience scratching their heads as they try and figure out "how he did it."

The Effect
The magician borrows a coin from a member of the audience and then has that member mark it with a pen to identify it later. Taking a small sheet of paper, the magician then folds the paper over the coin four times, creating a tight packet through which the outlines of the coin can be seen. To the astonishment of the audience, the magician then proceeds to tear the packet into fourths and apparently the coin with it. A moment later the coin, with the same identifying marks, is retrieved from a pocket and given to the spectator.

The Secret
The method of the fold is deceptive and leaves an escape route for the coin in question.

Materials
A sheet of paper around four by six inches and a large coin. A magic marker for marking the coin is also required.

Once the fold is understood the magician can do many different effects by slightly changing the trick, but this classic is fantastic as it is.
Next Page