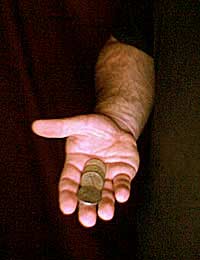 There comes a time in every magician’s act when he needs to make a handful of coins vanish. The Multi Coin Vanish is the key skill to making this happen.

The Effect
The magician takes four or five coins and streams them from one hand to another as he goes about his act. He passes the handful of metal from one hand to the next and all the while the faint clinking of coins provides a backdrop to his story. After one pass of the coins from hand to hand he pauses, holds up the receiving hand, and opens it to show that all the coins have vanished!

The Secret
The key move is similar to a finger palm vanish, and what is normally the enemy of the magician- coins clinking together- actually provides the key misdirection.

Materials
While this trick could be done with buttons or other small, noisy objects, it works very well with coins.

Preparation
No advance prep needed beyond practice, and a plan on how to make the coins reappear.

The Multiple Coin Vanish is not a trick in and of itself, but rather a sleight of hand move that often provides the key to performing some other illusion. This move should be practiced until it can be performed flawlessly, and it will take practice to determine how many coins the magician can manage when performing this sleight.

When the actual move is made, when the coins go from right palm to right fingers, it needs to be done quickly. The clinking of the coins as they slam into each other will sound exactly as if they fell from right hand to left. This is the key that, along with the fact you are repeating a move already seen, will convince the audience that the coins are indeed in the left hand.