Coins Through a Table Trick 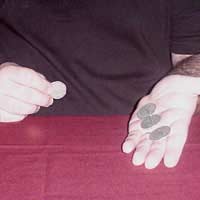 A classic trick that is perfect for performing after dinner using a number of coin sleights to fool the magician’s dinning companions.

The Effect
The magician either borrows four coins or uses four of his own. He places four coins in one hand and then slaps them down on the table - one of them has vanished and he retrieves it from under the table. He then takes three coins and repeats the move, showing that, again, one of the coins has magically passed through the table. Again and again the magician repeats the move until all four coins are shown to have passed through the solid table.

The Secret
A napkin in the lap and a number of sleight of hand moves are the key to performing the Coins Through a Table trick.

Materials
Any four coins will do, as long as they are the same denomination and can be easily handled and vanished by the magician. A cloth napkin in the lap is helpful, which is why this trick is great for after dinner.

Preparation
The magician should spread the napkin on his lap in such a way as to catch falling coins silently without allowing them to roll out of his lap.

If four identical coins can be borrowed the magician is granted a little extra amazement, but this trick works fine with coins the magician produces. The magician, through the course of the dinner leading up to performing, should make sure he is seated close to the edge of the table with the napkin spread in his lap.