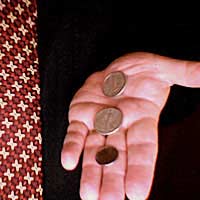 Everyone would love to be able to multiply their money with nothing more than a few quick gestures but only a magician can make it happen.

The Effect
The magician holds up a small denomination coin and explains that, as much as he likes to have money in his pocket, there are times he would like to have a bit more. Right in front of the spectator’s eyes the magician takes hold of the coin with both hands and almost immediately spreads them open, to show that the one small coin has multiplied into two more valuable coins.

Three coins - two large and one small - are held in such a way as to fool the spectator.

Materials
One small denomination coin and two larger is all that is needed.

Preparation
Only a moment’s preparation is needed, long enough to place the three coins in the starting position, although it is important to note angles and point of view.

This trick can be done quickly as a one off bit, or as part of a larger routine. The essence of the trick is doing it right in front of the spectator’s eyes.
Next Page