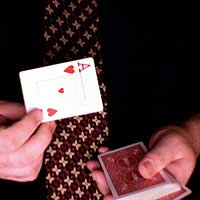 Practically the first card trick every magician learns, the peek a boo find lets the magician find the spectator’s card every time.

The Effect
After spreading the cards, the magician asks the spectator to make a choice and pull it out of the deck. Once memorised, the card is put back into the deck. With a minimum of fuss the magician thumbs through the deck and retrieves the chosen card.

The Secret
The secret is the “peek a boo”, or just the peek, where the magician looks not at the chosen card but a key card he then uses to find the chosen card.

While it can be used as a magic trick all by itself, the Peek a Boo Find typically requires some embellishment to keep the audience interested. As a tool for finding a card, the Peek a Boo Find is used in hundreds of card tricks, many of which are simple variants of this one.

As can be seen by the variants, the possibilities are endless. The magician just needs to make sure the use of the key card is done as subtly as possible.