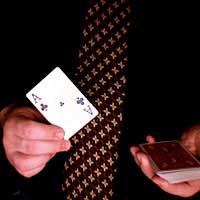 An easy trick to learn and perform using a classic method of finding the spectator’s card with a twist.

The Secret
Using a “key card” the magician spots the chosen card when thumbing through the deck.

This is one of those card tricks that are taught to young magicians and for a good reason. It takes one of the basic methods for locating a card and expands upon it, showing how many ways a magician can use a tool once they know it.