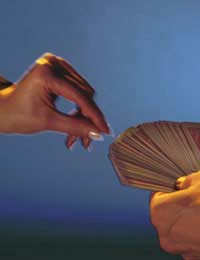 Get ready to really make your audience think, as they try to figure out how you do this classic card trick.

A card, freely chosen by a spectator, is signed and then torn into four quarters. The torn bits of card are wrapped in a handkerchief and then secured with a rubber band. At the command of the magician, the handkerchief is opened to reveal that the card has vanished, except for one corner. The other pieces of the card are discovered back in the deck, completely restored except for the missing corner, which is shown to match the resorted card perfectly.

The marked spectator card is only partially torn, with the remaining tears made upon a dummy card. Controlling the bits of cards-as well as the spectator's perception-is the key to making the Torn and Restored Card Trick a success.

A handkerchief, a rubber band, a marker pen and a normal deck of cards are all you will need to pull off one of the classic mind blowing card tricks.

The key to this trick is the dummy card, which is as easy to make as tearing a playing card. Take an indifferent card and rip one corner off, which you may discard; you now have your dummy card ready to go.

Place this card on top of the deck, face down, with the missing corner to the bottom left (for a left-handed grip.) Place an indifferent card on top of the dummy card and put the cards in their box. Have the handkerchief and pen handy, place the rubber band in your right coat or trouser pocket, and you are ready to begin.

How to Perform this Trick