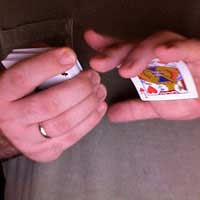 Requiring a bit of advanced slight of hand, this trick nevertheless is a mind blower when properly done. Get ready to be accused of performing real magic with the Card Transposition!

The Effect
The magician takes a regular deck of playing cards and shows the top card, which he then places in his right trouser pocket. He then shows the next card, which he places face down on a table and asks a spectator to place their hand on top of it. He reaches back into his pocket and produces the first card, and on three both cards are turned face up, to reveal that they have switched places!

The Secret
There are two slight of hand moves required for this trick, the double lift and the card palm.

Preparation
Lots of practice is required to get the slights down perfectly- a necessity when performing this or any other complex illusion.

The magician produces a deck of regular playing cards and proceeds to explain that they are not, after all, very normal, but rather behave in odd ways. He offers to demonstrate.

Magician performs a double lift, showing the second most card as if it were the top card, and says (for example), “here we have the two of clubs, which I will place in my pocket.”

The double lift and card palm are key here and must be practiced in front of a mirror to ensure that they are done correctly. The double lift involves riffling the deck of cards with the right thumb and stopping when there are two cards left. Pinching both cards on the bottom, the magician can turn over the packet as one card with practice. Likewise the card palm requires practice- holding the deck of cards in the left hand; place the right over the deck grip just one card. Bend the hand slightly and the card will stay in place. Make sure no card edges are peaking out around your fingers.