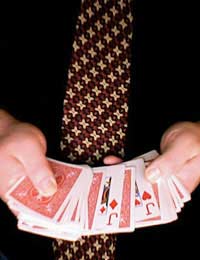 A fantastic card trick that involves a bit of audience participation and a bit of sleight of hand for a mind blowing reveal at the end.

The Secret
A special way of counting three cards as two sets up the reveal right under the eyes of the spectator.

Materials
A normal deck of cards is all that is required.

Preparation
Outside of practice there is no special preparation needed.

Any two cards of the same value can be used as the “detectives” in the story, but face cards or aces have most visual effect. Part of this trick takes place in the hands of the spectator and the magician should use this time to do the one of the sleights required.