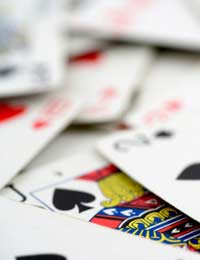 Magicians deftly handle cards and make it look easy, but there are years of practice that go behind sleight of hand. Luckily for the impatient there are plenty of tricks like this one that use simple math to help the magician amaze his audience.

The Magician hands out a deck of cards and has them shuffled, and then takes them back. He counts off a small packet of cards and passes them out and asks the spectator to look at the third from the top and show it around. He then directs them to spell out the name of the card silently while dealing out cards, and then hand the packet back. After a moment the magician is able to name the chosen card!

The specific number of cards and the order in which they are counted - all under the magician's control, of course - is the secret to the New Spell Your Card trick.

A simple deck of playing cards is all that is required.

The only sleight needed is a quick peek at the bottom of the packet of cards, and the ability to count to yourself while talking - simple enough, but do practice these techniques.

When demonstrating the counting technique, make sure your packet does not have nine cards, and chose a card that is not the third from the top.