Home > Card Tricks > Do as I Do Trick

Do as I Do Trick 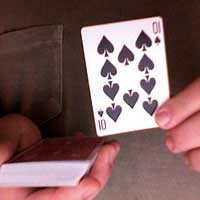 A classic card trick using two decks of ordinary playing cards. The magic takes place in the spectator's hands and leaves a smile on their face.

The Effect
The magician produces two decks of playing cards with different coloured backs. Telling his audience to “Do as I Do” he shuffles the cards and switches decks. Both magician and audience member pick their favourite card and then cut the deck multiple times. Once more switching the deck both find the favourite cards and in a magical moment, flip them over to show they are the exact same card.

The Secret
Using a classic “peep” technique, the magician is in total control the entire time.

Materials
Two decks of playing cards; preferably with different back colours or designs to keep them easy to tell apart.

Place both decks of playing cards on a table between yourself and your partner. Allow them to pick which deck will be “theirs” and pick up that deck, telling them to “Do as I Do.”