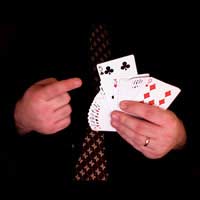 Requiring two sleight of hand moves and a bit of polish, this is a very simple, very stunning card trick.

The Secret
Keeping track of and then manipulating the card allows the magician to reverse it right under the nose of the spectator.

The Upside Down Card Trick is one of the more simple effects that have the spectator’s card reversed in the deck, but because the sleights required are minor and can be done simply and quickly, the effect is much greater in the end.