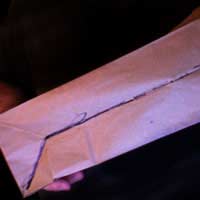 The Double Walled Bag Vanish makes use of a magic prop that can be easily created out of common household items.

The Effect
The magician produces a paper bag and reaches in to retrieve a banana skin. Stating that this was his lunch bag he has a bit of a problem. The banana had gone bad in the paper bag - apparently they make bananas ripen very fast and now the skin is starting to smell. Tossing the banana skin back in the bag, he produces his magic wand, waves it over the bag and declares the skin has vanished. To prove his power, he then rips open the bag to show that it has, indeed, disappeared.

The Secret
The bag provides the means for making the banana skin disappear.

Materials
A banana skin and a specially prepared double walled bag are required.

Preparation
The double walled bag must be created in advance (instructions below) and the banana skin placed in the open, “normal” part of the bag. At this point the trick is ready to perform.

Any size paper bag can be used for this effect. The size mainly depends on what the magician is planning to make disappear. For the purpose of this article a lunch bag is used. Two bags, scissors and glue are required.

When making the insert to create the secret pocket, it is advisable to trim the top slightly as well. This way if the bag is tipped slightly towards the audience they will not notice a tell tale shadow or space to give away the fact that the bag is gimmicked or different from a normal paper bag.