Home > Stage Magic > Five Cards: Are You Sure?

Five Cards: Are You Sure? 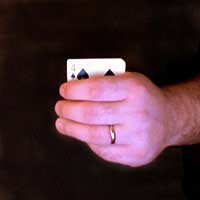 A classically handled card trick, one of the few that are appropriate for the stage, which will baffle any audience.

The Effect
The magician takes a pack of cards from a table and announces that he only needs a few cards for this trick and deliberately counts the cards in the pack, showing that there are five. Declaring he only needs two, he counts off and discards three cards, one at a time. Then he recounts but discovers he still has five cards in his hand.

The Secret
The key to this trick is a particular false count that allows the magician to show eight cards as if they are five.

Materials
A regular deck of playing cards are all that is required, plus a lot of practice.

Preparation
Setting aside a pack of eight cards (or more if doing the advanced version) prior to the show is all the advance preparation required.

Regular sized playing cards are fine for this stage trick, as it is important for the audience to see the amount of cards in the magician’s hand, not their value. Smooth and natural motions, combined with a touch of acting, will make this trick a success.