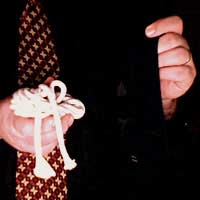 Performed at the end or the beginning of a rope routine, this crowd pleaser is a great stage effect for audiences great or small.

The Effect
The magician declares he needs a length of rope for his next trick and searches for one under a table or inside his jacket. He comes up with a three foot length, which he holds in his left hand. Deciding it is not long enough to suit his needs; he reaches up with his left hand and pulls the rope, which begins to lengthen in full view of the audience. Twice more the magician stretches the rope, ending up with a length triple the size he began with.

The Secret
The rope was always nine feet long; it just appeared to be shorter in the beginning.

Materials
A nine foot length of rope and a dinner jacket.

Preparation
Coil the rope from the middle of its length and then put it in a dinner jacket pocket. Feed the two ends of the rope up the jacket sleeve of the left hand where they can be quickly grabbed by the right fingers.

The Stretching Rope trick is a fantastic way to start a rope routine - while the magician may not need nine feet of rope for any single rope trick beyond this one, he can cut the appropriate lengths from this starter rope as he goes.