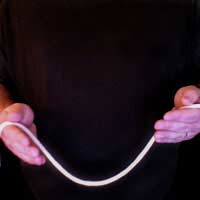 One of the classic effects, the Cut and Restored Rope trick never fails to please and can be done close up or on stage.

The Effect
The magician displays a length of rope and runs it through his hands. Stopping in the middle, he brings his hands together to form a loop and then produces a pair of scissors and cuts the rope in two. Declaring he will now make two ropes into one, he ties the two pieces into a knot and takes a bow. When the audience demands more, he wraps the rope around one hand and then unwraps it to show it is restored into one length.

The Secret
A special move allows the magician to cut the end and not the middle of the rope.

Materials
Soft rope is best - magician’s rope if possible and about three feet long. A pair of scissors.

Preparation
No advance preparation is required. Starting the trick with the scissors in the right pocket makes sense for when they are discarded at the end.

The Cut and Restored Rope is a staple in a magician’s arsenal of tricks and can be a great lead in to many other rope tricks. This trick appeals to young and old alike and can be done on stage or right before the eyes of an amazed audience.

Magician’s rope - soft rope with the “inner core” removed - is the best for this trick, but it can be done with a cotton clothes line or even thread, but rope is best. Practice the move where the false loop is formed over and over until it can be done without hesitation or hitches, as this is required to make the illusion believable.