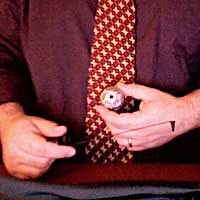 One of the classic stage effects from the golden age of magic, the Zombie Ball is simple to learn and has infinite variations.

The Effect
The magician walks on stage and up to a small table draped with cloth. Sitting on top of the table is a shiny metal sphere on a stand. In front of the sphere is a foulard. The magician picks up the sphere and tosses it from hand to hand, turning it to show all sides and then replaces it on the stand. Picking up either end of the foulard, the magician covers the sphere briefly and then lifts the silk to show the sphere is gone. With a word the magician commands the sphere to appear, rising up slowly from behind the foulard. From there the magician begins to interact with the sphere, making it float, dance, vanish and reappear at will.

The Secret
The secret to the Zombie Ball is a hidden prop that allows the magician to “remotely” manipulate the ball.

A miniature zombie ball could be made out of a ball of tinfoil and stiff wire, but commercial props are a better way to go. Also a large handkerchief or silk foulard is required.

Preparation
Plenty of practice and rehearsal are all the advance preparation required. Pre-show set up requires the zombie ball to be place with the secret hole away from the audience and the zombie stick hidden in the foulard.

Stage magicians have been performing their own Zombie Ball routines for centuries - called the spirit ball, zombie ball, magic sphere and other names, the trick is easily recognised once begun. The secret to manipulating the Zombie Ball itself lies in a hole in one side of the sphere and the stick or wand used to manipulate it.

The stick is made from stiff wire. One end is wound round to form a sleeve for a finger and the other ends in a cork to fit into the secret hole. With the stick on the finger of one hand and the cork in the zombie ball, the magician can then make the ball raise up and down and move back and forth with small movements of the fingers, all of which are hidden by the foulard.