Home > Stage Magic > Half and Half Trick

Half and Half Trick 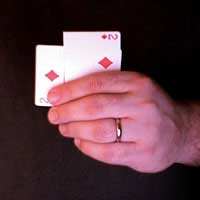 Like most mentalist tricks, the Half and Half trick gives the audience a false choice before revealing that the magician is a master of mind reading.

The Effect
The magician holds aloft a large sheet of cardboard. Along either side five cards are held in place with an elastic band, backs to the audience. At the top is a clip. The magician declares he will read the mind of a spectator and asks that one step forward. The magician takes a marker and writes on the side of the card board closest to him - “My prediction” he says. At this point he asks the spectator to point to one of the ten cards. The magician takes the card and places it under the clip on his side of the board and then turns it to show that the card chosen matches his prediction written large and bold before hand.

The Secret
The false choice created by making ten special cards in advance is the secret here.

Materials
Ten special cards are made (instructions below) and either a large clipboard with a notepad or a sheet of cardboard and a clip. Elastic bands and a marker round out the materials.

Preparation
The magician creates the special Half and Half cards and then places them in the bands. The notepad should be attached to the clip and the marker placed nearby.

This trick is more effective with a sheet of cardboard and a clip, but using a large clipboard with paper allows for reusing it for the next show. There are two parts to this trick - creating the cards and then performing Half and Half.

Each indifferent third is then glued atop one of the ten “force cards”, so called because the magician is forcing the spectator to chose this card unbeknownst to him.

When done the card should be two thirds force card and one third indifferent card.