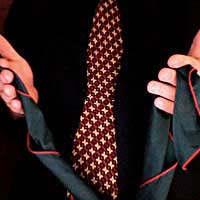 Rope magic is a staple for most stage magicians and the ability to tie a knot that is not a knot is a must have.

The Effect
The magician displays a large silk and twirls it into a rope. Holding the silk by the ends in each hand, he then moves one end over so he is holding both ends in one hand. Reaching through the loop with his right hand he grabs one end and pulls it through, forming a knot roughly in the middle of the silk. Running his hand down the length of the silk the knot seems to slip off and into the magician’s hand, but when he opens the hand the knot has vanished.

The Secret
When the magician makes the move to tie the knot he instead creates a slip knot.

Materials
A large silk or a three foot length of rope can be used for this trick.

Performed with a rope or a silk, the Untying Knot Trick is a real crowd pleaser:These moves must be performed effortlessly. Any hesitation will ruin the suggestion that the magician is simply taking the most expedient route to creating a knot. If the magician hesitates the audience will assume he is up to some trickery and the end result will be spoiled.

If performed with a rope it is important to cover the forming slip knot with the left hand to hide the small loop created. The magician can then pull on both ends of the rope, one at a time, to tighten it just enough to give the appearance of a true knot.