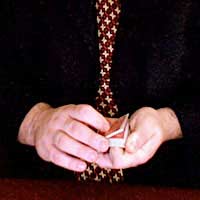 A commercial card trick inspired this home-made prop, which delivers laughs as big as the card is long.

The Effect
The magician, smartly dressed in shirt and jacket, spreads cards and lets the spectator take one of them. After the card is returned to the deck, the magician puts the deck in his jacket pocket and announces he will now do the rest of the trick without using his hands, only magic. He declares he will make the card travel from the deck to his shirt pocket and makes the appropriate gestures.

The Secret
Knowing how to force the ten of diamonds on the spectator is the key to making this trick work. The rest is showmanship.

Materials
A home-made long card is required and a shirt with a pocket and a jacket to hide the long card.

Preparation
Creating the long card is described below.

The long card is simply the punch line to this trick, but the real sleight of hand comes in forcing the ten of diamonds. The magician can use any method, one of which is described below: