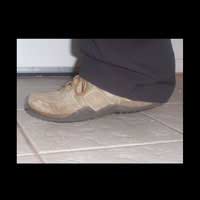 Once a heavily guarded trade secret, the Balducci Levitation has become a classic weapon in every street magician’s arsenal.

The Effect
The magician gathers his audience closely around him, the better to see this miracle occur. “Watch closely now” he says and looks down at his own feet. After a moment of anticipation, the audience gasps as the magician’s feet float off the ground a few inches, hover in defiance of nature’s laws and then quickly drop to earth.

The Secret
Good balance and the right angles hide the secret of the Balducci Levitation, which is simply that the magician pushes off the ground with the toes of one foot, cleverly hidden from view.

Materials
An anytime, anywhere illusion, the Levitation only requires practice and the proper awareness of angles.

Preparation
No advance preparation is needed beyond a great deal of practice.

It is key here to have the right angles. If you have too many people surrounding you, if you have an audience that does not follow where you lead, or if you fear you may be spotted from afar then do NOT perform this trick, or you will ruin it for yourself and other magicians.