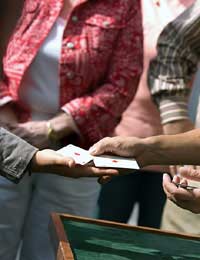 David Blaine is, without question, the single most exciting magician working today. He has revolutionised and remoulded the practice of magic, giving it a new credibility with the youth of today.

Magic, prior to Blaine, had become highly stylised, an almost ritual affair in which the same old tricks would be repeated by formally-dressed performers accompanied by glittering female assistants. David Blaine changed all that, taking magic down from the podium and into the street. He performs tricks while walking in amongst a crowd full of people, without the benefit of the props or sheltering distance which a stage magician enjoys.

Blaine approaches complete strangers on the street, often in insalubrious neighbourhoods, and asks them if they want to see some magic. Sometimes he is rejected. The magic he performs includes card tricks and watch-stealing routines. On one occasion he turns a beggar’s coffee into money; on another, he helps a down-and-out win the lottery.

Much of it is traditional fare but the spontaneity of the street setting gives it greater vibrancy than is usually found on the stage.

David Blaine has become known not just for his unique brand of magic but for a series of high-profile and often record-breaking stunts at public places around the world. On various occasions in his native New York, he stood high on a lofty pillar for 35 hours, spent almost 3 days encased in ice and a week buried in a plastic coffin beneath a water tank on the Trump tower.

David Blaine has made two attempts on the world records for underwater breathing. In the attempt without advance oxygen consumption, the record stood at 8 minutes 58 seconds. Blaine appeared to be in distress after about 7 minutes, however, and the attempt came to an end. The second attempt, which involved taking oxygen in advance, was more successful. It took place live on the Oprah Winfrey show and saw Blaine break the existing record of 16 minutes 32 seconds, setting a new benchmark of 17 minutes and 4 seconds.

All but one of Blaine’s stunts have been within the United States. The exception was in London, where Blaine lived without food in a transparent box held suspended over the Thames for 44 days. Reportedly, Blaine encountered Britain’s sharp sense of humour first hand as he was taunted by having burgers waved at him, thrown at his box and even flown around it on miniature remote control helicopters.

Blaine goes through rigorous physical preparations for each of his stunts, training his body relentlessly and often starving himself beforehand and during the stunt to facilitate its execution.

These stunts are as much feats of endurance as illusions, if not more so, as can be seen from David Blaine’s physical condition when he emerged from ice, for example. He looked shattered and was taken immediately to hospital.

David Blaine is certainly not without criticism from his professional peers. Some argue that he is essentially a showman who has brought nothing technically new to the practice of magic. He just rehashes the old tricks in a new setting to make them seem fresh and interesting. Even his stunts do not deserve comparison with Houdini, they say. While Houdini performed difficult feats requiring skill, David Blaine’s stunts are merely passive acts of endurance. In so far as Blaine has a special talent, his critics allege, it lies in public relations, not in the practice of magic or the art of illusion.

Magic is about capturing the imagination of the public, and David Blaine has done that to a greater extent than any other magician in recent years. Demonstrating that traditional routines can be updated to connect with a new generation, he has succeeded in making magic cool again.