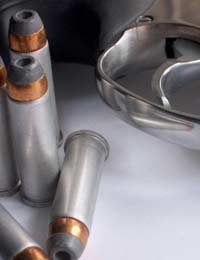 Early in the 20th century, Chung Ling Soo was the world’s most popular magician – the David Copperfield or David Blaine of his day. In March 1918 his career ended with a bang, literally, on the stage at the Wood Green Empire theatre in London. While performing the famous bullet-catching trick, in which he appeared to catch a bullet with his teeth, something went wrong and he was shot for real in the stomach. He collapsed on stage and died a few hours later.

Part of Chung Ling Soo’s act was to conjure up an air of oriental mystery. He did not speak on stage, and he conducted interviews through an interpreter, claiming to speak no English. In truth, however, Chung Ling Soo was not Chinese at all. He was an American and his real name was William Jefferson Robinson. In fact, the whole Chinese act had been conceived specifically so that Robinson would not have to speak on stage. Previous experience in America had taught him that, despite the technical skill displayed in his magic tricks, he lacked the personal charisma to hold an audience’s attention. The atmosphere of ancient mystery was a substitute for the kind of stage banter that other magicians liked to use for that purpose.

The name Chung Ling Soo was derived from that of a real Chinese magician, Chung Ling Foo, who was popular in America at that time. Robinson had enjoyed only moderate success in America under his real name, but after deciding to “go Chinese”, he hopped on the boat to Europe and presented himself anew. There he enjoyed great success, winning over the crowds with his carefully-contrived image.

The jewel in the crown of Chung Ling Soo’s act was the bullet-catch, although he did not always perform it, saving it for special occasions.

The essence of the trick was twofold :

After allowing the bullet to be marked by a member of the audience, the magician would palm it. At the same time, another bullet would be placed in the gun. The gun would have been modified so that it didn’t fire properly, but would look as if it did. While, with a flourish, the magician removed the previously-palmed bullet from his teeth, the real bullet would still be in a hidden compartment in the gun. In Chung Ling Soo’s gun, however, residue had built up over time, eventually blocking the entrance to the hidden compartment, meaning the bullet remained in the chamber. This is what led to the fatal accident.

The bullet-catch trick was by no means unique to Chung Ling Soo. In fact, it had been in use for centuries. Of the many magicians who have used it, at least a few are known to have died and many more have been wounded but survived. The Chung Ling Soo incident diminished its popularity for a while. Houdini considered adding it to his act, but was talked out of it. Eventually, though, the trick was revived and, in fact, is still in use today. In a few cases, it even appears to have been performed for real, with assistants firing low calibre-bullets at “magicians” wearing bullet-proof gear.

All magic is about illusion, unless your name happens to be Merlin and you can do it for real. Often the illusion involves flirting with danger. In Chung Ling Soo’s case, the flirtation went too far and the illusion not far enough. Ironically, the only words the magician ever spoke on stage were also the last words he ever spoke. But he remained a showman to the last, still thinking of the audience. “Oh my God! Something’s happened. Lower the curtain.”
Next Page